Pearl Harbor is not like any other museum experience.  One must prepare for this excursion.  I get up at 0530 in the morning in anticipation of getting free tickets.  Driving to Pearl from Waikiki is a half hour and I want to be sure to be there in time to stand in line to get tickets especially for my girlfriend who has never been.  Yes. FREE.  Tour guides ask for top dollar to take you to this site.  Tourism is high up as a way of making a living on the islands.  I think the price they ask is a bit high.  I was quoted $115/person.  I rented a car..

Entering sacred waters toward the USS Arizona Memorial .  The ship is beneath the white structure

One of the reasons you want to get to the museum early is if waters get rough, the ferry will be cancelled.  Waters in Pearl Harbor are the calmest it seems way early in the morning.  WE were fortunate.  We got on the 830am boat that headed us out for our 8-10 minutes we are allowed to be on hallow ground.  The navy takes us out and park rangers and volunteers give a great summary while on deck of important facts about the sailors who perished.

As we arrived back on shore, we take our time to see the artifacts of that day and videos taken that bring this all home for one to understand the magnitude of the events leading up to why we went to war and what mistakes and eventual victory looked like.

Our ferry docking next to the Arizona’s sacred grounds

The costs of war were tremendous and brought tears to my eyes.  I never want to see us in a war again.  That is my final answer.  Going to this place solidifys my believe in peaceful living with other nations as best we can.  And YES WE CAN. 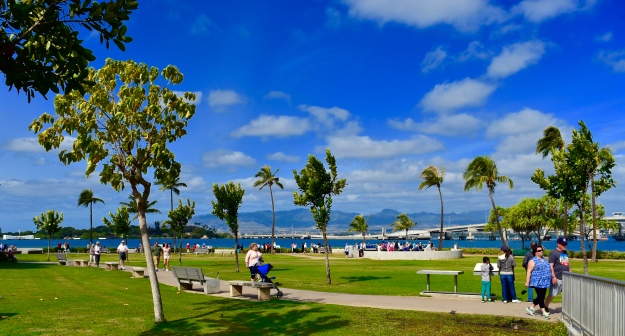 A beautiful day on the grounds of Pearl Harbor

These are the men who who died later that asked to be buried with their comrades.  Mr. Teslow was the first to ask for this honor and it was permitted.  It began a beautiful tradition that is left for only four last surviving men of the USS Arizona. May God’s speed be with them all.

NOTE:  I have visited Pearl Harbor several times.  I wrote once before about my experiences.  Each time I go out there, I learn something new.  Today I share with you somethings that touched me differently than the last.