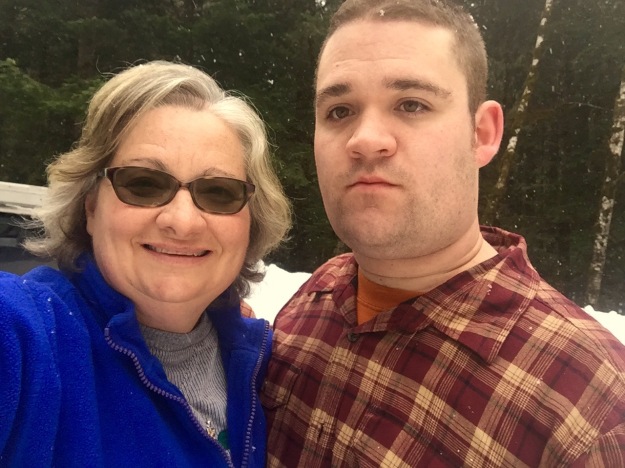 Luke and mom on a very good day snowshoeing

If you read this, it will change your life…

Luke has a rather severe case of autism. It is coupled with Bipolar. He can rage at a moments notice.  If you are in his way, the chances of you getting physically hurt are high.

I had just returned home from a trip to Hawaii ( yes I have a life) when I had my son over for a few nights.  While finishing supper with  Luke, he was his usual hyper self. What happened next was 5 hours of pure nightmare.

Luke ran upstairs to his room and began hitting the back of his head into the wall. He has made several holes in the drywall, but it had been 5 years.  I caught only one bang of his head visually by the time I got to him.

While physically injuring himself, Luke was crying loudly and a hematoma was developing on his cranium.  I was able to ice his head, give him meds, and get him in a bath tub to calm down.  The pills kicked in, but the crying and other bad behaviors were persistent. Five hours later he was asleep from pure exhaustion. I did not sleep at all that night.

You may wonder why I did not call 911. I want to tell you why. Here is what conversations took place from this incident. It was almost exact to what I had heard a few years ago when I reached out for help. One day I fear I will be unconscious and can not even make these calls. Luke did make me bleed. I am fine though:

1. I called the crisis hotline and left a message. That’s right I got a voicemail.

2. I received a call in 30 minutes from a man who called himself a social worker who triaged the hotline. He said my son would be restrained if anyone came to my home. He put a referral in for me, although I said my son doesn’t need restraining.

3. The referral call came an hour later and she was a social worker too. She stated to me almost verbatim what the first man said. She added one bit of information by saying we have nothing good for adults with autism and our community is 20 years behind .

4. I talked with Luke’s medicine management provider. He stated Luke was more than he could handle and refused to see him in his office the next day if he was aggressive.  He said call 911. I believe this is a cop out by providers and lame.  I think providers need to see the patients how they can be and not all calm.  I worked for 30 years as a nurse. I understand the hazards.

5. I spoke with a RN friend who works as a mental health nurse on the largest psych unit in Seattle . She knows Luke personally and said again to me: “Luke would be restrained. Please try not to bring him or call 911.”  She knew my pain and our predicament.

6. I called Luke’s case manager and met with him. Luke is being placed back on a list for a special home. Will there ever be one found ? We have been down this road before and three homes refused to take him.

Rewind :  Will society ever do what’s right  for folks as Luke?

Luke is better right now, but I wanted all my readers to know we have a crisis in mental health. Again, will we ever get this right?  I will not call 911 for my son to be handcuffed.