Blogging is a vehicle that I enjoyed utilizing in the last few years.  In the fringes of life and just holding on with a pen in hand,  I can truly say my blog was a godsend.  As the moments of my life converged into a simple exercise on thoughts put to paper,  I worked toward illustrating my ordinary moments as extraordinary with eyes wide open to the vastness of those everyday experiences.  That was intentional on my part. After all, most life is ordinary and only a tiny portion of is extraordinary.

END_OF_DOCUMENT_TOKEN_TO_BE_REPLACED

Building on last week’s post, Outsmarting Getting Old, I wanted to thank you for your expressions of concerns and sharing with me your own struggles.  All paths can bring healing.  It is finding the one that works well for our own needs.

Today this little vehicle popped up next to me to my surprise!  What if I would have not seen that thingie and hit it while I was driving. Oh my the hurt, right.

END_OF_DOCUMENT_TOKEN_TO_BE_REPLACED

Luke during a research study of his brain.

Did you know the bigger your head is the smarter you are? Perhaps you have heard that the more bumps you have on your skull means your IQ is flying off the charts? These were the ridiculous questions once pondered by those who studied the science of the brain. We have come so far is really an understatement. In fact it is clear our century is bringing new brain research to a whole new level.
This research does not come cheap. There are many places we can donate our money including Michael J. Fox’s Foundation or the Autism Society of America. As a brain tumor survivor and a mother of a son with autism, I am keenly aware of the essential need to cure brain diseases . It has been noted recently that one out of every six people is affected by brain disorders. The diseases of the brain touch us all which can include Parkinson’s, Alzheimer’s, Addiction and Strokes.
What would a cure mean for me? It would mean the world! I know one man in my neck of the woods who has done a tremendous amount of research on the brain. His is Paul Allen. I would highly recommend you checking out his site: http://www.alleninstitute.org/ .
I know many of us do not have the money to send off for research, but have you ever thought about donating your time or even yourself to be researched? I wanted to highlight this because if you are one of those affected by any of these medical problems, I would encourage you to participate in any research study you can. Our family has made it a practice to be involved with the research community in hope for a cure. We have done this as a family and it has been extremely gratifying. Our son Luke has been in at least 10 studies. I almost think I could call him a professional at it.
The mystery of the brain is amazing, but as I studied the brain’s general functions when I developed a large brain tumor-it made me aware of why I was having the problems I had encountered over a period of years before my tumor was diagnosed. My tumor was so large that it shifted the contents of my brain to one side. It sat on top of the motor cortex specifically the movement area of my brain that squeezed the vision, behavior, hearing and coordination centers. Here is a fascinating photo I give credit to TIME magazine that gives you a layman’s look at what part of the brain does what:

Hello from my computer room to yours!

Statistics can be a cool thing. I just wanted to mention a few tonight about my blog. This blog has went over 10,000 views in over 60 countries since its inception last year. I have had just about 1500 comments also. My first 5000 views came from May-December of last year. The last 5000 came in the first 8 weeks of this year. When I receive an award from my writing-it feels me with joy and I am pinching myself. Be assured I am reading through many of your blog posts and I hope in some small way my success would encourage you to keep writing. I am not at all tech savvy, but in time I have been able to figure out different things on WordPress to make my page more user-friendly. For example, I have on the right side of my page my top 8 posts that you can see highlighted by a grid of 8 photos. These are the ones you all liked the best or viewed the most. Now March is almost here. I can not wait to see what is around the corner with spring on its way!! 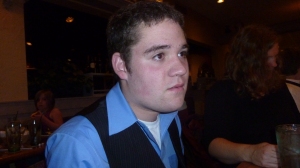 My handsome son Luke when he took mom out for dinner!

I had to repost this blog with Luke in his vocational class as they tweeked it some so the other link was no longer available. I hope those of you who could not see it are able to with this link. WE have a wonderful public school district here trying very hard to work with our disabled citizens. As a parent of a typical developing young man as well as Luke I get the unique opportunity to see two worlds. I do not take either one for granted. We need the two to become more inclusive though as my heart knows if others see the world through the eyes of the special needs, I believe real progress could be made. OK folks enjoy your day and give lots of hugs to your loved ones as we have no guarantees in this life.